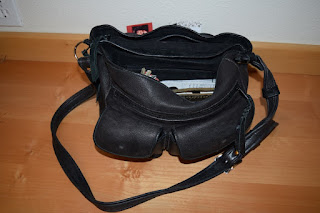 The brother of a co-worker was learning how to work with leather. I described the purse I wanted, and he made it. I absolutely love it and it’s worth every penny. The purse is black, inside and out with lots of compartments and pockets. 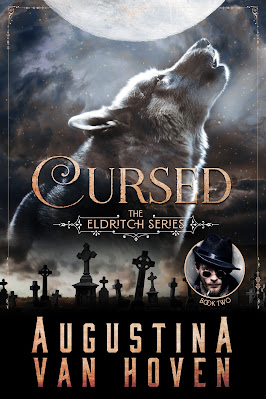 Not everything is beautiful under the light of a silvery full moon.

A new evil walks the night in the woods near Dante’s Hallow. Nicholas Harwood and his companions-a druid sorcerer, a witch, his best friend and a few ghosts, race against time to stop this new creature before the body count grows higher. Can they save the town without alerting the local people to the truth about the supernatural?

About the Author: Augustina Van Hoven

Augustina Van Hoven is a paranormal romance author who lifts the veil on the secrets hidden in the world around us. Whether it’s traveling through a crack in time, interacting with the dead, or meeting the supernatural creatures living among us, her characters find love in unexpected places. What would you do if you actually met a shifter? Or woke up a hundred and fifty years in the past? Or looked into a mirror and found the face staring back at you wasn’t your own? Come and read stories that show you what is possible if you will only believe.

Country music or Michael Buble?   neither one

Find the Book at:

Blog: Favorite Book and Book with author Jana Richards - Are you a fan of Word War Two Historicals?

About Your Favorite Book:

I had a little internal debate with myself as I tried to decide which book is my favorite. I finally narrowed down my all-time favorite author to Rosamunde Pilcher. Then I debated which book of hers I could call my favorite book because I truly love them all. I finally settled on COMING HOME. I’m a sucker for a World War Two love story.

So, here’s a brief plot summary of COMING HOME:

In 1935, fourteen-year-old Judith Dunbar is left behind at a British boarding school when her mother and baby sister leave join their father in Singapore. At St. Ursula’s, Judith becomes friends with Loveday Carey-Lewis (love that name—could it be more British?) and the lonely teenager is taken in by Loveday’s family at Nancherrow, their Cornish estate. At Nancherrow, Judith learns about British aristocracy, family, values, and wealth.

When war breaks out in 1939, the young men of Nancherrow go to war, including Loveday’s brother Edward and her fiancé Gus, and Jeremy Wells, a friend of Edward’s who’s been in love with Judith for years. Both friends will learn the meaning of sacrifice, loss and pain. Nothing will ever be the same again.

I first read COMING HOME in the 1990s. The book first came out in 1995 so it was a new read when I picked it up at the library. Like I said, I’m a Rosamunde Pilcher fan and have been ever since my mother-in-law picked up a bunch of her books at a garage sale in the eighties and gave them to me. I was excited Ms. Pilcher had a new release.

I mostly remember bawling my eyes out as I read this book. This is a sweeping story of coming of age against a backdrop of war. Judith learns some hard lessons about the true meaning of love and responsibility when her parents are lost and her younger sister Jess comes into her care. The book takes us across the world, from the English countryside in Cornwall, to Ceylon and Australia, and many points in-between. The characters are wonderful and memorable, especially Judith.

At 826 pages, COMING HOME is a long book. But it didn’t feel long. As one Goodreads reader said, when you finish those 826 pages, you wish you had another 826 pages to read because you want to stay in that world with those characters. I understand the audiobook is 40 hours long! It sounds daunting but I am definitely going to have to give the audiobook version a listen and revisit that world.

When I finished COMING HOME, I felt like I’d been through a war, and had fallen in love, along with the characters. Even after all these years, the characters, and especially the emotions the book evoked, have stayed with me, and I believe that is the hallmark of great writing. 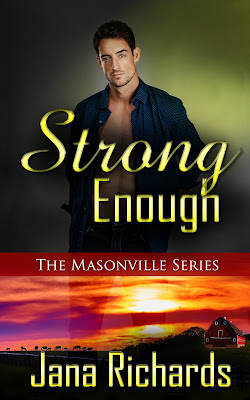 Love can make you stronger, if you let it.

Charlotte Saunders has a full life—a rewarding career as a nurse, meaningful volunteer work at a dog shelter, and family, friends and pets she adores. But no matter how hard she tries, she can’t forget the horrible event that’s haunted her for ten years.

A survivor of childhood sexual abuse, Damon Greyson now helps others who have suffered trauma. His experience and intuition alert him to trouble in Charlotte’s past, and he wants to help her, if only she’d let him.

As they work together to help veterans suffering from PTSD and neglected dogs needing loving homes, their feelings for each other deepen. But when the trauma from Charlotte’s past roars back to life, both are forced to confront their painful histories—or die trying.

About the Author: Jana Richards

Jana Richards writes romantic suspense, historicals set during WW2, and contemporary romance, including small town romance and romantic comedy. She loves to create characters with a sense of humor, but also a serious side. She believes there’s nothing better than peeling back the layers to see what makes a character tick. When she’s not writing or keeping the dust bunnies at bay, she can be found reading a book. Jana lives in Western Canada with her husband Warren.

Red, White or Blue? Since I’m Canadian, I have to say red and white.

Cake or Pie? Do I really have to choose?

Find out more at:

About My Favorite Handbag: 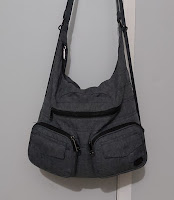 My handbag is a Lug Zipliner. I bought it online during the pandemic when my old handbag started to fall apart and the majority of stores were closed. I wasn’t familiar with the brand name, but it was the closest thing I could find to what I wanted. Which is, lots of pockets and space.

It holds everything I need and even things I don’t need, but forget to take out. It’s 15” x 12” and can be used as a shoulder purse or worn as a backpack. I wear mine as a shoulder bag, but I think I’m going to try wearing it the other way. Mine is gray with a black interior. There is an insulated pocket tucked into the side, and the front zippered pocket is RFID. It's perfect for everything I need. 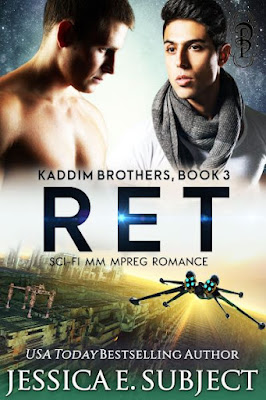 Ret and Ilam plan to stay single forever. But one night can change everything.

Can these two teammates survive the resulting media storm? What will it mean for their careers? Their team? And for them?

Jessica E. Subject is a USA Today bestselling author of science fiction and paranormal romances, bringing to life a wide variety of characters. In her stories, you could not only meet a sexy alien or a pop star tiger shifter, but also unsuspecting clones and feisty omegas. You may be transported to a dystopian world where rebels are fighting to live and love, or to an alternate reality where shifters live among humans. When Jessica is not reading, writing, or doing dreaded housework, she likes to go to fitness class, listen to BTS, and walk her Great Pyrenees/Retriever her family adopted from the local animal shelter. Jessica lives in Ontario, Canada with her husband and two not-so-little children. And she loves to hear from her readers.

Cake or Pie? Both

Find the Book at: