This is by far my favorite purse, and not because of the unusual color—it looks much brighter in natural light. I probably have about two dozen (or more) purses, but there are 2 reasons why this bag tops my list.

Unfortunately I didn’t realize until it was too late how much I would love this purse, or I would have bought it in one or two other colors. I’ve had it now for several years, and I bought it at a shoe store in the local mall, so I stop in every so often just in case something similar comes back into stock. 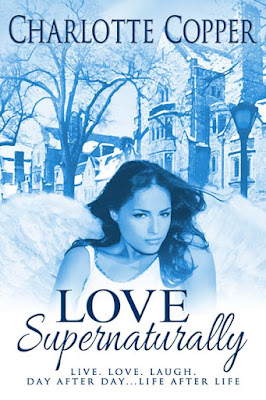 Cassandra Wilson, angel and first-year nurse, spends her days helping other people. Day after day. Life after life. An innocent night out with Fraser, a university junior and varsity hockey player, leads to something more serious and Cassie begins to experience feelings she’s been trying to avoid.


Cassie took the stairs two at a time and almost ran into her roommate as she came to the small landing at the top.


Gabriella folded her arms across her chest and tapped her tiny bare foot.


Pink toenails beat an impatient pattern on the hardwood.


Did the girl have gypsy blood? Her psychic abilities were uncanny.


“With a hockey player,” Cassie explained.


Gabriella’s foot stilled and her eyes widened. “Which one?”


“Fraser something. I didn’t get a last…”


Gabriella laid a hand on Cassie’s arm. “Be careful, he’s a player. And I don’t mean hockey.”


That wouldn’t be a problem. She didn’t want a relationship and this wasn’t a date. And if the night did end with sex, well, she’d welcome a little…distraction. After all, she was an angel not a nun.

Hey, Charlotte, I had not considered the handbag problems really tall gals like yourself have. I have a shoulder thing and go for totes nowadays.

Love the bag! And I love the line "she's an angel, not a nun." The storyline sounds fun, best of luck with this one.

Great-looking bag and so practical. Love Supernaturally sounds delicious...best of luck with sales. :)

Thanks for sharing! The idea of an angel who has an actual job is intriguing!

Thank you Linda, Joanne and Liese for your fun and encouraging comments.
And thank you Vicki for hosting me today!

Love the sound of the book, Charlotte! As for purse, I agree that I need pockets on the outside--at least for my keys. But I love the divided sections on the inside, especially if they zip. Best of luck with your book!

Hi, Charlotte! So happy to have you with me again.

Hi Charlotte! I love your bag! Good choice! I like bags with pockets on the outside too. Here's to many book sales!

Wonderful cover! I love the bag. I also love shoulder bags but not the cross-chest ones. Looks so soft and pretty! Thanks for sharing!

Hi Charlotte! You have a FOOT on me! LOL! I am 4'10 (I lost an inch this past year and I think it is hiding in mt waist!)
The book sounds great! I will have to add it to my reading list! My youngest grand daughter is named Cassandra.

This is my kind of bag. I can fit a lot inside.

Thank you all...Barbara, Karilyn, Melissa, (petite but powerful) Cathy & Angela...for stopping by and commenting. I'm truly honored by the virtual love of readers and authors.