Guest Judy Penz Sheluk - Do you have a purse like this?


Handbag & Book with...
Judy Penz Sheluk
Do you have a purse like this? 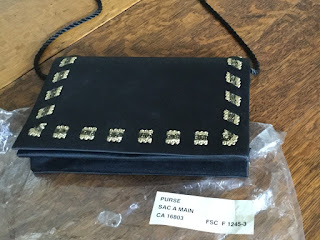 I ask because I’m sure it’s far from rare. I bought it from Avon Canada at least fifteen years ago, not because I needed an evening clutch (I did not) but because it was on clearance and I thought it was pretty.


I hadn’t thought much about this purse over the years, but it doesn’t take up much space, so it’s been spared from many closet purges, and for some reason, I even stored it in the original bag.


In late April, I attended Malice Domestic, a mystery writers/fan convention in Bethesda, Maryland. There’s a dress-up Awards banquet, and I brought this purse with me for the occasion. It doesn’t fit much more than pin money, a lipstick and a tissue, but there’s even a little mirror inside—what else do you really need? 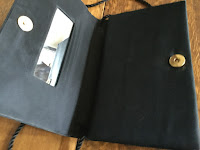 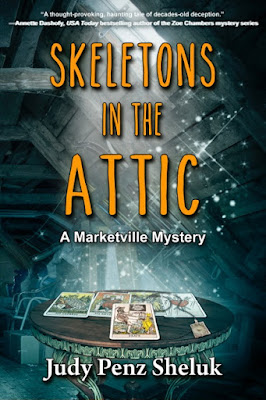 What goes on behind closed doors doesn’t always stay there…


Callie’s not keen on dredging up a thirty-year-old mystery, but if she doesn’t do it, there’s a scheming psychic named Misty Rivers who is more than happy to expose the Barnstable family secrets. Determined to thwart Misty and fulfill her father’s wishes, Callie accepts the challenge. But is she ready to face the skeletons hidden in the attic?


Leith Hampton placed the will in front of him, smoothing an invisible crease with a well-manicured hand, the nails showing evidence of a vigorous buffing. I wondered what kind of man went in for a mani-pedi—I was surmising on the pedi—and decided it was the kind of man who billed his services out for five hundred dollars an hour.


He cleared his throat and stared at me with those intense blue eyes. “Are you sure you’re ready, Calamity? I know how close you were to your father.”


I flinched at the Calamity. Folks called me Callie or they didn’t call me at all. Only my dad had been allowed to call me Calamity, and even then only when he was seriously annoyed with me, and never in public. It was a deal we’d made back in elementary school. Kids can be cruel enough without the added incentive of a name like Calamity.


I knew at some point I’d have to face the fact that my dad wasn’t coming back, that we’d never again argue over politics or share a laugh while watching an episode of The Big Bang Theory. Knew that one day I’d sit down and have a good long cry, but right now wasn’t the time, and this certainly wasn’t the place. I’d long ago learned to store my feelings into carefully constructed compartments. I leveled Leith with a dry-eyed stare and nodded.

Thanks for hosting me Vicki. I wonder if anyone out there remembers this bag. An Avon lady, perhaps!

I also have a small black clutch, just for those fun evenings. Good luck with your book. I wish you many sales!

Hi Judy, Hard to let go of those clutches! I still have a black patent-leather clutch I bought at Birks in the 1970s. I enjoyed reading and highly recommend Skeletons in the Attic. Congrats!

Thanks Melissa! Vicki, I am not surprised. Joanne, I had no idea Birks sold purses at one time. I thought they were just high end jewelry.

It's cute, isn't it Angela?

What a great bag, and the best part is that you held on to it all those years!

It's cute! I don't have a clutch, but I do have a small black velvet one for formal events (that I never get invited to, LOL). I think my grand daughters found it, though and it's gone! That's ok...it carries their treasures!
The book sounds very interesting! I will look for it! I don't have much time to read at the moment,though...writing, editing and raising these 4 monsters (said in the most loving tone!), doesn't leave much time to read. I usually fall asleep as soon as my head hits the pillow! 3 1/2 years of averaging 5 hours sleep a night takes a toll, but it got rid of insomnia, lol!

Hi Cathy. Wow, I thought my life was busy! thanks for taking the time to read and comment. I love velvet...would love a velvet evening bag to take to the places I never go to either!