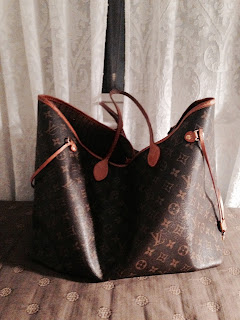 To say that I love my handbag is an understatement. I feel like my handbag and I have a relationship, and when I describe when I bought it, it’s like describing love at first sight.

I was in Nashville with my best friend. I had just been promoted and we spent a night out listening to live country music and drinking peach moonshine. And if you’ve ever had the misfortune to drink peach moonshine for more than about five minutes, you’ll have a pretty good idea of how awful I felt when I woke up the next morning.
The only cure we could think of was fried chicken and getting our hair washed so someone would rub our heads until we felt better. So we did these things and wandered into a mall, feeling mildly better but again; peach moonshine. So that’s a relative “good.”
I’d always coveted a Louis Vuitton purse. And I’d always wanted a giant purse. When we walked past this impossibly elegant store, my best friend pulled me inside.
It was all kind of a blur, but I spotted the bag and walked up to it and put it back down about four separate times. The saleswoman was kind and very Southern and she could tell I was on the fence. So she told me a story about how durable this bag was, how it would last forever. And the example she gave me was that one of her clients used hers as a beer cooler. On fishing trips.
Well, in my hungover state this seemed 1) excessive and yet, 2) dare I say – practical?
She then told me the purse was rated to carry 200 lbs before the straps would break. And what had seemed an impossibly silly expense suddenly seemed so doggone sensible I knew I had no choice.
Since that time, my son has vomited on it and I’ve spilled an entire bottle inside it. It’s been used as a diaper bag, a cat toy and a big rig for hauling matchbox cars. No, I’ve never used it as a beer cooler. Yes, it’s probably held up 200 lbs or more. 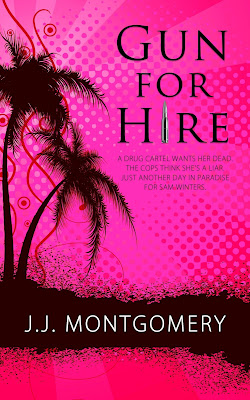 Louie and I have been together now for seven years, which is only slightly less time than I’ve been married. And the seven year itch is nowhere in sight.
“…If you ever find yourself in a place where rent-a-cop is the only job your less-than-stellar reputation will allow, you might as well opt for good scenery. This much I’d figured out since I’d wrecked my old life back home. Be a rent-a-cop in Oregon, and live in the shadow of who I used to be? Shudder. But rent-a-cop on Maui? That was a different story. Hell, I was a mustache and red Ferrari away from being Magnum, P.I. ”
“As I rounded the highest point of the trail, I looked out over the peninsula that separated Secret Beach from Makena Beach, nearly at Maui’s southernmost tip. A lone surfer, dark-haired and gleaming like a seal, ducked beneath a giant, rolling wave. I held my breath as he went under, waiting for him to emerge, and had to expel air before his head finally surfaced, yellow surfboard beneath, his strong arms propelling him outward to sea. Even at this distance, I could see the hard outline of his muscled back, saltwater streaming off him as those muscles worked before he came to a rest, sat up on his board, and turned his face toward the sun.
See, why couldn’t I fall for a guy like that? Someone who was carefree, uncomplicated, and unbelievably hot? Why was it my hormones only raced when confronted with grumpy, distant, and unobtainable? And hot, I reminded myself. My hormones at least had that part right.”

Find Gun for Hire at: Amazon
Find J J Montgomery at:  Website
Oh my, JJ, even I can find no reason not to buy this gorgeous bag!

That's my kind of handbag!

Maui! Who wouldn't take the job! Or the handbag! (Still can't see it as a beer cooler though).

Thanks for sharing and best wishes!

nope, not a beer cooler. lol

That's a purse I'd buy too! What a sensible purchase! All the best!

I'd have been sorely tempted to buy it, Melissa!

This bag is just fabulous isn't it? It can do anything :) I too may have been tempted to pick up this hand bag :)

Hi, Crystal! It's loverly. I'm seeing green as in envious.

Wow, that is quite a bag...somehow, I can't imagine using it for those purposes, lol. Thanks for the post!