Handbag and Book with 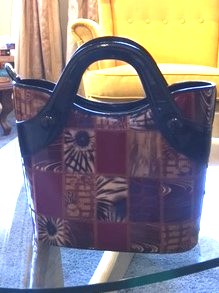 Thanks so much for the chance to tell the story of this gorgeous handbag which cost much more than I'd ever dreamed of spending. So I was touched and amazed when, after admiring it in a shop in a country town north of Melbourne, it was gifted to me that night.

I'd been showing the sights to elderly friends of my parents (from the days we lived in Lesotho, Africa) and Pat had said I was like the daughter she never had. (She had four sons.) She said she'd been watching me to see what I showed a particular interest in so she could buy me something I'd really like.
And I certainly love the elegant shape and feel of this leather bag with its unusual treatment.
I also feel really lucky that our family had such good friends whose friendship has endured over more than half a century. 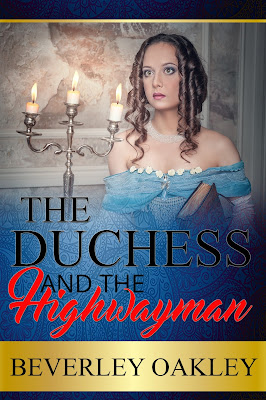 A duchess disguised as a lady’s maid; a gentleman parading as a highwayman.
She’s on the run from a murderer, he’s in pursuit of one…
In a remote Norfolk manor, Phoebe, Lady Cavanaugh is wrongfully accused by her servants of her brutal husband’s murder.
There’s little sympathy in the district for the duchess who’s taken a lover and made clear she despised her husband. The local magistrate has also vowed revenge since Lady Cavanaugh rebuffed his advances.
When Phoebe is discovered in the forest wearing only a chemise stained with the blood of her murdered husband, she persuades the noble ‘highwayman’ who rescues her that she is Lady Cavanaugh’s maidservant.
Hugh Redding has his own reasons for hunting down the man who would have Phoebe tried and hanged for murder. He plans to turn ‘the maidservant with aspirations above her station' into the 'lady' who might testify against the very villain who would see Phoebe dead.
To her astonishment Miss Redding promptly burst into tears. Again.
Phoebe shook her head as she watched Miss Ada bury her face in her hands, rocking her shoulders as she shook her head, the green feather of her bonnet threatening to snag on the spikes of the hedge. Miss Redding was perhaps fours years younger than Phoebe. Perhaps just a year or so out of the school room when she’d met Wentworth.
“Stop behaving like an emotional child,” Phoebe muttered putting her hand awkwardly on her shoulder. “First you accost me and then you insult me and say you’re not supposed to be speaking to me. I think it’s time to bid you good day, Miss Redding before your brother sees us and accuses me once again of upsetting you.”
Miss Redding looked up at her through reddened eyelids. “Don’t go,” she pleaded. “I know I was rude even though there’s truth in what I say – you surely must admit it. But my situation is so much worse than yours. I have lost everything!”
“Your virtue, which you so foolishly offered?”
Instead of another angry outburst, Miss Redding merely nodded sadly. “My virtue…and then…” She took a deep breath. “That which I cannot speak of. So much worse. And now my will to live.” She began to cry again but this time with such heart-rending sobs that Phoebe was moved.
She gripped Ada by the shoulder and drew her deeper into the garden where there was no chance of being observed and asked, “There was a child?”
Find The Duchess and the Highwayman at: https://www.books2read.com/u/38Dw6d/
Find Beverley at: http://www.beverleyoakley.com/

Wow! What a great premise! Sounds like a good read, Beverley.

What a pretty bag and what a nice gift! That's a true blessing. All the best with your book!

Thanks so much, Angela and Melissa. My bag was a very special gift! And thank you for your best wishes, both of you! :)

What a wonderful gift and it's something you can carry with you often and think of her. How sweet!