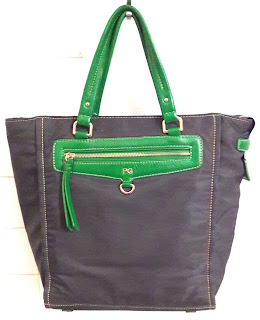 This fabulous, roomy handbag was gifted to me by a dear aunt, Veena Mehta. The PG tag stands for Purificación García – I had never heard of the label before, but now I’m all for it. The bag has withstood every insult including me filling it with sharps like keys and pens and pencils – these things have killed every other bag of mine, but not my PG!
When I first set eyes on it, I balked a bit at the color – the gray was fine, being a neutral color, but the green meant that I’d have to be careful to wear something green every time I carried the bag. Of course, once I fell in love with it, green became my favorite color and I made sure I had enough green in my wardrobe that I could carry my PG every day of the week.
I learned something new thanks to my PG – that the color green is often called a "colored neutral" because it is as easy to match as any of the neutral shades (brown, gray, or black). Interesting! 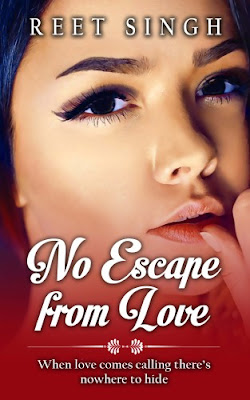 Will the demons from their past succeed in tearing them apart?

After personal tragedy strikes, Mohini Kapoor runs away from the city to her grandparents home in a village in Punjab. Though she manages to pick up the pieces of her broken self, and even builds a life for herself, the horror of her experience is difficult to forget. She buries it deep down inside her subconscious mind until the arrival of a stranger threatens to resurrect the old demons.

Reputed photojournalist, Aalok Ahuja, has to hide out for a few days to escape circumstances beyond his control. When his friend recommends Tejopur, a remote village in Punjab, Aalok expects life to be simple there and, perhaps, even boring - instead, his world is thrown into chaos by a woman more desirable, and vastly more complicated, than any he has ever known.

When their destinies collide, attraction flares, but secrets threaten their new found feelings. Should they cut and run or give love a chance?
This close up, in the silvery light of a full moon, Aalok looked quite beautiful. Harmless even. Mohini crept closer, ostensibly to pick up her cell phone, but she couldn't look away from the sleeping form of the man who plagued her so much.
Although she wasn't even remotely interested, it was silly to pretend that Aalok wasn't a fabulous specimen. Now that she could stare without fear of embarrassment, she noted spiked lashes that fluttered ever so slightly as he slept. His jaw was strong and square, a determined contour - no wonder he walked about as though he owned the world.
Mohini itched to know the truth. Was he running away from something? How absurd for a city slicker to come out all the way to a village he had never been to before. Even more absurd was for him to come unannounced.
Find No Escape from Love at: buy book
Find Reet Singh at: website

Dear Vicki, Thanks for featuring my bag and my book!

What a great bag! I love that it withstood so much! All the best with your release!

What a great bag and excerpt! I'll have to check out both!

Dear Reet! So lovely to have you visit today and show off an adorable handbag and to share about your book. Happy writing!

This bag looks like it makes a great travel bag!

Thank you so much, Melissa, Liese, Vicki, and Angela,
Glad you liked the bag.
Happy writing to you too!