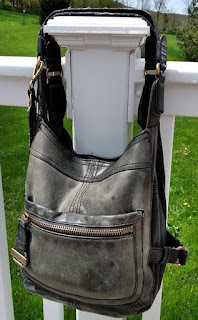 Ever since high school, I carried a purse. But after my son was born and I returned to work, the only thing that would hold my breast pump, bottles and bags, plus my wallet, sunglasses, etc. was a backpack. But even after three kids I still carried it. It was amazing how many things I accumulated inside. A small photo album with pictures of my kids, a notebook and extra pens to jot down story ideas when I had some down time, my current read, etc. It was a durable bag from a high-end company, and though it was battered and a bit stained, for me it worked great.
My daughters however, were mortified. They changed purses to match their outfits and here was mom, lugging around a backpack like an aged hippie. So one year for Christmas my oldest daughter bought me two purses.

One was brown, the other gray. I picked the gray one. It was leather, which I love, and had a pretty lining in a light color so I could easily find things. Switching to a purse forced me to down-size which was hard in the beginning, but technology (my e-reader and cell phone) has helped. But I’m something of a packrat, and five years later the weight of my purse has steadily increased along with its contents.
Though my photos are on my phone and I no longer need to carry a breast pump, I now carry things like wipes, a plastic spoons, and small cars, for my little grandson, amid my own paraphernalia of pens, highlighters, breath mints and lipstick. Needless to say the bag is weighted down. If it wasn’t made of leather it probably would have broken from the strain. But it’s still good, so why change? 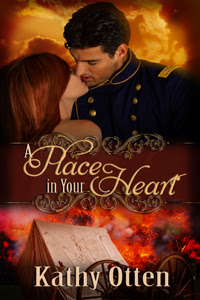 Gracie McBride isn’t looking for love; she’s looking for respect. But in this man’s world of Civil War medicine, Gracie is expected to maintain her place changing beds and writing letters. Her biggest nemesis is the ward surgeon, Doctor Charles Ellard, who seems determined to woo her with arrogant kisses and terrible jokes.
Charles is an excellent surgeon. He assumed he would be well received by an army at war. He was not. Friendless and alone, he struggles to hide the panic attacks that plague him while the only person who understands him is a feisty Irish nurse clearly resolved to keep him at a distance.
But, Charles is sent to the battlefield, and Gracie is left with a wounded soldier, a box of toys, and a mystery which can only be solved by the one man she wishes could love her, both as a woman
“No. I want you to go home before the death of that ten-year-old boy becomes so ordinary that one day you wake up and realize you no longer have the ability to feel.”
She squared her shoulders and stepped toward him. “Me own husband was a doctor, sir. I’ve birthed babies and stitched wounds. I stood by William’s side during surgeries and passed him instruments. I helped him clean the intestines of a man gored by a bull, before putting it all back inside that man’s belly. Me delicate sensibilities did not send me into a swoon then nor will they here. I thank ye for yer concern, Doctor Ellard, but ’tis who I am. And by the saints, as long as I have breath in me body, I will feel, and I will care.”
Their gazes locked in that moment and something flickered in his icy depths, overshadowing his usual cynicism with what she suspected might be admiration. The harsh lines of his face softened.
“Saint Jude must indeed be watching over you, Mrs. McBride.”
“That he is, Doctor Ellard, that he is.”
He gave her a brisk nod and opened the door. “You’re not going home then, are you?”
She turned. “Ye know us Irish, Doctor Ellard. We don’t know what we want, but we’ll fight to the death to get it.”
Find A Place In Your Heart at: Amazon
Find Kathy Otten at: Website

So lovely to have you show off your handbag, Kathy!

Kathy, when I saw the photo of your backpack, my first thought was, "Gee, that bag has seen a lot and has some stories to tell." Best wishes with your book release!

My husband is often mortified about my choice of purses because I hate to replace them even when they are very used and loved. One year he bought me a purse for my birthday just to replace the old one.

Your cover is beautiful. I wish you all the best on your release.

Hi Angela,
Thanks for stopping by. You're, right. The old purse has been everywhere and seen every high and low in my life. I get attached to things like purses... and back packs. :)

Hi Melissa,
I doubt my husband would even be able to tell you what kind of purse I carried, unless he was looking right at it. :)

Appreciate your compliment on the cover. It was done by Debbie Taylor.

Thanks for stopping by. :)

Thanks for having me, Vicki. Hope you enjoyed a lovely holiday weekend with your family. :)