Blog: Book and Bag - Holly Bargo shares her "winter purse" and her #book Bear of the Midnight Sun #readromance #MFRWauthor 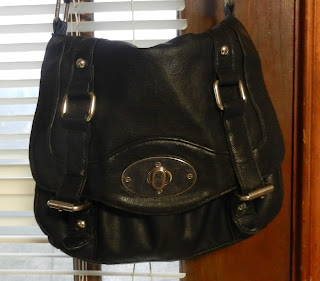 Shown here is my "winter" purse. For summer, I have one that's "natural" colored macrame. I've had it for over a decade and can't remember where I bought it. I've purchased other handbags since, but I keep going back to this one because it hits all my criteria.

I prefer simple purses, the smaller the better, but large enough to hold my Kindle for those times when I have the opportunity to read, such as when I'm a passenger instead of the driver. A strap sufficiently long to hang the bag from my shoulder is a must--and that strap must be comfortable. I cram a lot into a small purse. I need the bag to be secure, because I often have to deal with four-legged critters and risk dropping or dumping my bag all too often. 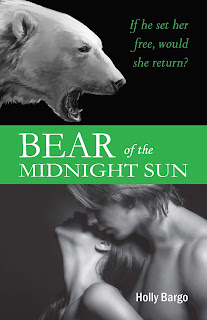 Polar bear shifter Sindre meets and recognizes his mate on the stage of a Las Vegas talk show. He takes action and the show's hostess takes advantage of the publicity-generating opportunity. Railroaded into a quickie marriage on national television, Miranda finds herself plunged into a world she never knew existed with a new husband she isn't sure she wants.

More about Holly Bargo: Holly Bargo is the author's pseudonym and really did exist in the form of a temperamental Appaloosa mare. The author and her husband live on a southwest Ohio hobby farm with a menagerie of cats, horses, and one very big dog. They have two children, one graduating from university in 2019 and the other enlisted in the military.

Red, white or blue? Holly can't choose between red or blue--both are great colors. But white? Nope. When you live on a farm, white is not a good color.
Spring, summer or fall? Generally Holly prefers fall--after frost kills off most of the bugs and the weather cools to a more comfortable temperature.

Coffee, tea or champagne? Holly is a diehard tea drinker. Champagne's nice for special occasions. She simply doesn't like coffee. You know that if Holly's drinking coffee, then she's in desperate need of a strong caffeine jolt.

Pencil or pen? Holly writes with a pen, a habit developed decades ago in college.

Thanks, Holly, for sharing your Book and Bag with me!

Your purse looks like one I would own! I love the size and sturdiness. What a hot cover! I wish you all the best with your release!

Wow, Vicky what an amazing handbag, Robust yet pretty I will take that to the office anytime!
I would.ve preferred a wee bit bigger , because I carry a lot of stuff, Thank you for sharing!

Hi, Melissa! Thank you for visiting with Holly today.

Hi, FabrianoBotiquebyReena! So glad you stopped by to visit with Holly and me. Come back often.

Our company manufactures best quality Book Bags .
We provide our services all around the world.We also deal in many accessories so come contact us.