Handbag and Book with 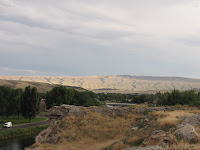 While I was editing my draft of Passages, we made a family trip west that included a stop at Thermopolis, Wyoming. My new novel had hot springs in the plot and I wanted to visit some. The word thermopolis comes from the Greek word for ‘hot city’, definitely a good description for a town overtop of the world’s largest mineral hot spring.

The waters well up at a hot 135 degrees Fahrenheit and a rate of 3.6 million gallons a day, bringing with them 27 different minerals. Over the centuries, evaporation has left mounds of colorful rock deposits in many places around Thermopolis. 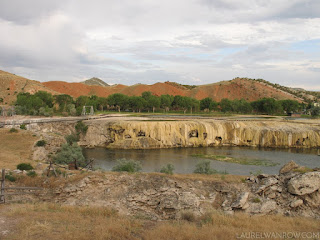 It’s pretty and, we’d heard, therapeutic. Native Americans traveled to the Bighorn River basin to soak in the waters, and fur trappers described them as early as 1826. Today, the water is piped to many attractions, including hotels, water amusement parks, and our destination, Hot Springs State Park, which boasted of a free State Bath House—not a facility found in many state parks. 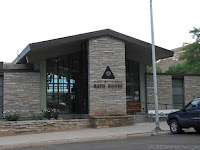 Inside the bath house, each visitor could select a private tub, or gather together outside in the covered soaking pool. There, the waters are moderated to 104 degrees, hotter where they enter and cooling across the pool, which was perfect for our family with two children. 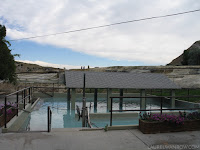 We joined a number of bathers who told us they were staying in nearby hotels and coming twice a day to ‘take the waters’. The recommended time to remain in the pools was short, fifteen minutes. While at first this seemed disappointing, after the allotted time we were warmed up—quite warmed up—and ready to go.
Hours later, I remarked to my husband that I felt really good, like I’d had a longer soak, or a deep massage. He agreed, and we realized this was the effect of the minerals—they had penetrated our bodies and worked some mysterious wonder on our muscles.
Hmm. That could be used in a novel… 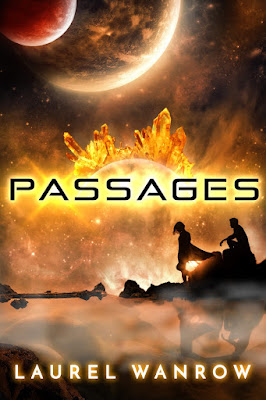 With toxic spores about to release across the planet, Eve is desperate to save the friends she’s made in her second life as a cyborg. When she joins forces with an amnesiac man also trying to save his grandmother, their plans lead to an attraction that could prove fatal—because Quinn’s forgotten secret will determine the fate of life on Aarde.

“Yes, how do you feel?” She stroked my cheek, her hand still humming. “I don’t detect the element in your system, but the amount I saw…”
It had gone in. It had gone in so easily and blended with my system so readily…my particle talent. It allowed the goud to interface with me, probably much easier than with others. Yet, the way Eve eyed me, agreeing I was fine avoided more conflict.
Much to my regret, Eve dropped her hand and backed up.
“PT says it might not be the same for Quinn,” Evangeline said, “being a newer generation of electorg. He’s never had the opportunity to test goudrogen and would be interested in—”
“No.” Eve crossed her arms, dismissing the suggestion.
They inspected their crystals. Evangeline’s had shrunk by two-thirds. Eve’s had grown, but its increase was noticeable only compared to the crystal’s prior size.
Okay, I had to know, though they didn’t seem concerned. “Where is the extra goud?”
Eve looked sheepish. “Uh—”
“Gone, right, Evy?” Evard patted her shoulder. “You saw how readily it flows. Even in the crystal form, the element constantly rearranges its lattice structure. Repeatedly taking the Waters allows the element deeper into the cells, until a user can direct the atoms—in liquid or vapor. They go, dispersed among the more in-tune Zeffirites.”
He shot me a smile, as if that mini-lecture answered the question. It did, it just didn’t clarify which one she’d done.
Follow the Passages Blog Tour to read more science & fantasy tidbits!
Find Passages at:  Amazon
Find Laurel at: Website
Enter the Rafflecopter Giveaway!


Laurel, the springs look fabulous. I've never tried any before.

I've been to a few, but Thermopolis is the only 'mineral' hot spring, and it sure made a difference to my muscles! Thanks for having me on, Vicki!

You're so welcome, Laurel! I'm so happy we met at the RWA convention. Hugs!!

This looks like a great read! The cover is amazing!

Those photos are awesome! Thanks for sharing!!

Love your photos I'd love to go there.
Nancy Burgess

Really nice and informative blog, keep it and thanks