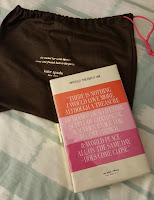 When I first saw this limited edition of the Kate Spade book themed purse, I had just had my first book published and decided I’d reward myself with it as a gift. The purse is s clutch, so you can’t load it down with stuff and take it anywhere other than to dinner or fancy event, because it doesn’t have a lot of room for anything other than a cell phone, and a few credit cards. But I love it! It’s been to every RWA conference since 2016 and to every fancy wedding I’ve been to since then. The fact that it’s a faux-book makes it a conversation starter at events, too. I get asked frequently about its meaning, which leads to my opening a convo about me being a romance writer. Love that! Colleen O’Dowd manages a thriving bridal business with her sisters in their hometown of Heaven, New Hampshire. After fleeing Manhattan and her cheating ex-fiancé, Colleen still believes in happily ever afters. But with her demanding business to run, her sisters to look after, and their 93-year-old grandmother to keep out of trouble, she’s starting to feel she may never find her Mr. Right.

Playboy Slade Harrington doesn’t believe in marriage. His father’s six weddings have taught him that life is better if you’re single and unencumbered. But Slade loves his sister and he’ll do anything for her, including footing the bill for her dream wedding. One thing he doesn’t plan on when he signs the checks is losing his heart to his sister’s smart-mouthed, gorgeous wedding planner.
When her ex-fiancé comes back into the picture, Colleen is forced to choose between Mr. Right and Mr. Right Now.


“Isabella has never referred to you that way.” Good gracious, was that my voice? It sounded like an army of frogs had invaded the back of my throat. “But it’s nice to meet you, Mr. Harrington.”


“Slade is fine.” He folded his hands into his trouser pockets.


If my voice mimicked web-toed croaking amphibians, his sounded like a lazy morning after a night packed with warm Irish whiskey and scorching sex.


Deep toned and low, with a scratch of gravel and a tiny smolder of smoke, those three words almost made me respond, “Slade is way more than fine,” but I kept my thoughts to myself and indicated the chairs.

Darling girl - thank yo so much for hosting me today and for introducing me to your readers and fans! I lovelovelove that KAte Spade bag so much. The fact that it looks like a book is icing on that proverbial cake for me.

Love the purse! Best of luck with your endeavors!

Ooo...as a purse lover, this is fabulous. Decades ago, my sister gifted me a book purse of one of my favorite authors: Jane Austen. The book: Sense and Sensibility. As always, wishing you continued success, Peggy. xo

Love that purse, Peggy. I've not seen one before. Best of luck with your current release :)

I'm so happy you are visiting today, Peggy and showing off your Kate Spade. I have at least ten Kate handbags. Love the style. Congratulations on your work too.

What a great purse! Sure to be a showstopper! I love your cover and wish you all the best with your release!

Mary - I am absolutely in jealous envy of your Jane Austen book/purse! If you have a link somewhere where it's available, I'd be your friend forever ( not that I'm not going to be anyway! Hee hee)

Barbara - I believe it was issues something like 10 years ago and I only found it on-line in 2015. I'm lucky I did/ From my understanding they made 4 different ones. Haven't been able to find the other three yet. Still looking, tho!!

Melissa - thank you for your kind words!!!!!

Hi Peggy! I LOVE your purse! That's adorable! And your book sounds good too. Best wishes for many sales!

Peggy, after reading your blurb, I can see your novel as a Hallmark movie!

What a neat purse. I have a question about your handbag. Is that crewelwork on it? It's so pretty.

Shirla - no, it's not crewel, it's for a better word -plastic overlay. I think they took a picture and then copied it onto the purse.